Track Files are wrapped per a constrained version of the Material Exchange Format, or MXF, specification. MXF provides a structured method for carrying a variety of essence types with metadata. While MXF is capable of carrying more than one essence type in a single file, it must be emphasized that the digital cinema application requires only one essence type per file. More can be learned about MXF on Wikipedia. The constraints applied to MXF for wrapping digital cinema Picture and Sound are defined in SMPTE ST429-3 Sound and Picture Track File.

Picture and Sound essence is frame wrapped using KLV (Key-Length-Value). The KLV Key identifies the nature of the essence present. Length refers to the length of the Value field. The Value field itself contains a frame of essence. More can be learned about KLV on Wikipedia. 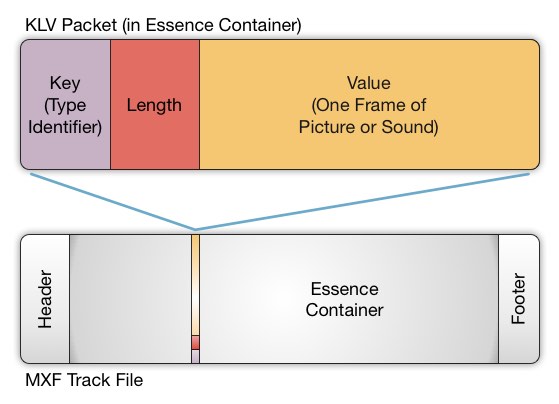