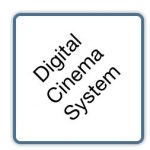 Digital cinema was originally designed to replace 35mm film, with the goals of lowering the cost of film distribution, securing distribution, and preserving the image quality achievable with 35mm film. Digital Cinema Initiatives (DCI), a consortium of the major Hollywood studios, manages the top level specification for the core technology. Equipment is tested to a subset of the specification per the DCI Compliance Test Plan (CTP). Interoperability is managed by DCI, SMPTE standards, or industry practice.

Movies are distributed in digital form, with movie data distributed as a Composition. Compositions are packaged for distribution as a Digital Cinema Package (DCP). Movies are encrypted prior to distribution, and decrypted at the cinema. The decryption key is provided in the form of a Key Delivery Message (KDM). Forensic marking also takes place, with picture and sound marked with time-of-day and location information. All secure processes take place in real time in secure hardware, such that unencrypted picture and sound data are never stored in user-accessible local data storage. The processor where decryption, decompression, and forensic marking takes place is referred to as a Media Block. The Media Block contains a Screen Management System (SMS), which provides the user interface to the projection system (also known as a “screen system”) and manages housekeeping tasks for the Secure Processing Block. 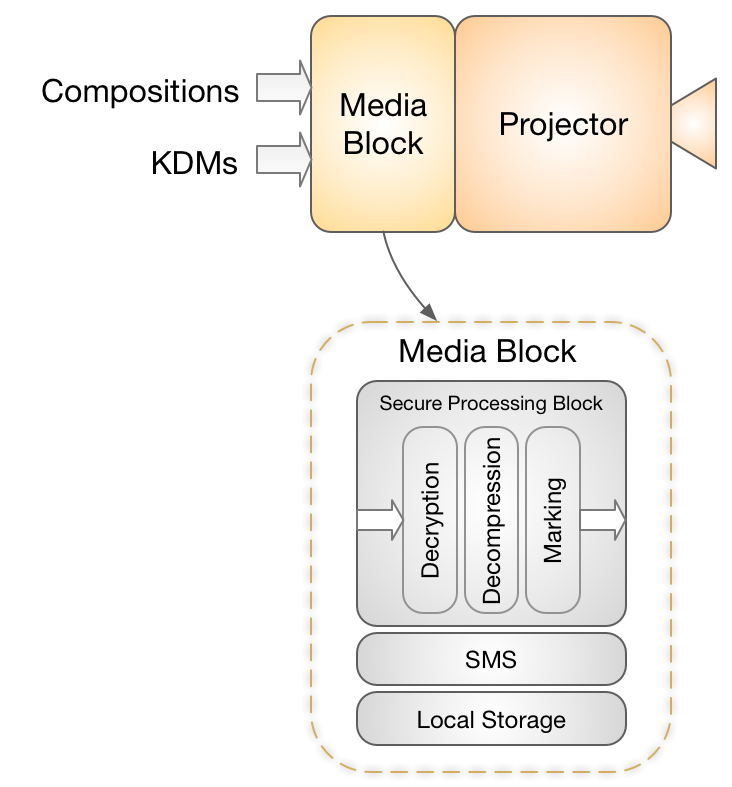 The majority of cinemas have more than one auditorium. In the language of cinema, auditoriums are often referred to as a “screen.” The management of multiple screens requires the means to schedule shows, manage content and keys, centrally store content and keys for later movement over a network to a screen, and the ability to monitor the status and health of the system.

DCPs arrive in the cinema by satellite or by means of portable storage, such as a hard drive, and are stored in local network storage. A typical composition is 200GB in size, and KDMs are generally under 100KB. It is not unusual for several versions of a title to be received, with features such as open captions and/or immersive sound tracks. Most cinemas schedule shows in the Point-of-Sale (POS) system, which is not part of the cinema system. A schedule manager will read the POS schedule, and from that generate the actual play times for advertisements, trailers, and movies at each screen. The schedule manager will also move compositions stored in local network storage to the appropriate screens. A key manager will catalog the KDMs received, and match those to each screen. In a more sophisticated system, the key manager will also facilitate the automation of KDM delivery by collecting and sending the credentials of the equipment to the appropriate KDM generation vendor.  The monitoring system will indicate if everything is ready for a show, and if not, raise the appropriate flags to cinema personnel.  All of the elements described are often combined into one product called a Theater Management System (TMS).

Digital Cinema Initiatives (DCI) is a consortium of the 6 major Hollywood studios: Disney, Fox, Paramount, Sony, Universal Studios, and Warner Bros. Formed in 2002, DCI issued version 1.0 of its Digital Cinema System Specification (DCSS) in July 2005. Numerous changes to the specification have since been issued, known as “errata.” DCI also publishes a Compliance Test Plan (CTP), based on its DCSS. Several testing agencies are authorized to conduct DCI Compliance Testing based on the CTP and DCSS. The latest versions of the DCSS and CTP, as well as a list of authorized testing agencies, are available at the DCI website.

The DCSS is the top-level document for baseline digital cinema system design. It comprises over 150 pages, nearly half of which specify the mechanisms of digital cinema security. To meet DCI’s specification, a Media Block must pass NIST FIPS 140-2 Level 2 testing, as constrained by the DCSS, in addition to DCI’s CTP. DCI also specifies or recommends compliance to numerous SMPTE standards. However, not all SMPTE standards employed in digital cinema are identified by DCI.

SMPTE stands for the Society of Motion Picture and Television Engineers, and is the standards body where the majority of digital cinema standards work takes place. (The JPEG 2000 profiles specified by SMPTE are standardized by ISO.) Standards group activity is managed online and available to SMPTE standards committee members at the SMPTE website. The SMPTE standards effort for digital cinema was initiated in January 2000, and continues to this day.